Geologic materials with ferrous minerals (usually magnetite) are good targets. Man-made iron and steel items such as drums and tanks are often sought using measurements of the magnetic field.

For the magnetic geophysical survey method to be useful, the targeted geologic structure or man-made item needs to be the right size and orientation to the earth’s field such that the anomalous field can be detected.

Buildings and building foundations, fences, cars, underground storage tanks (known or unknown), utilities, and landfill trash can create interference in the near-surface. Note that any one of these items may also be the target. Magnetometers are self-contained and portable, as is the base station when one is used.

Magnetic storms in the earth’s upper atmosphere can cause rapid variations in the inducing field, though the operation of a base station will allow the correction for most such variations. Ferrous materials such as knives or belt buckles, if carried by the operator, can contaminate the data. Many GPS units have a ferrite antenna making them unsuitable for use with a magnetometer.

For many distributed anomalies, the shape of the anomaly is dipolar rather than bull’s-eyed. Certain shapes and orientations of objects may produce outsized anomalies or almost no anomaly at all due to the orientation of the object with respect to the inducing field and the possibility of permanent remnant magnetization.

In UXO (unexploded ordnance) work where magnetometers are sometimes used to detect deep MEC (munitions and explosives of concern), magnetic soils and magnetized float will interfere with the results.

Deliverables typically include maps of the defined survey location, color contour maps of the data acquired, residual-anomaly separation maps if necessary, and an interpretation map showing the cultural features and designated areas that are anomalous. 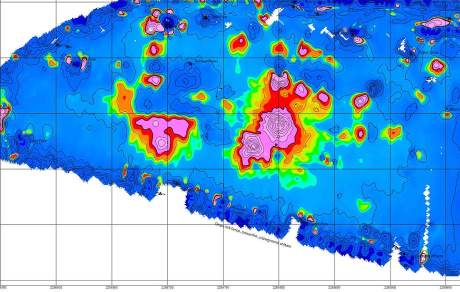