NanoTEM® is an early-time, Transient EM (TEM) method developed by Zonge in the late 1990s for near-surface geophysical mapping applications.

A strength of TEM is in revealing conductive objects embedded in a resistive background. Hence it is the preferred method for locating buried metal objects such as abandoned wells, pipelines, UST (underground storage tanks) and UXO.

Transmitters used for TEM send a time-varying current into a transmitter loop-wire to generate a pulsed, primary magnetic field, which induces eddy currents in the earth materials below. The decay rate of these currents is measured by receiver coils and used to show variations in resistivity in underground materials.

Prior to 1998, the long turn-off times for transmitted signals from traditional TEM transmitters, including Zonge generator-powered transmitters at the time, prevented the use of TEM methods for highly-resistive areas and very shallow soundings.

After conducting research showing the value of early-time data and of recording measurements at frequent intervals along the decay curve, Zonge developed an EM transmitter capable of the very fast turn-off times required to collect high-quality, shallow TEM data — the battery-powered Zonge NT-20. The NT-20 transmitter is used with a Zonge GDP receiver to collect NanoTEM® data.

A high-resolution, Time-domain EM tool for the near surface

The Zonge Dynamic NanoTEM™ has demonstrated superior performance for UXO and other shallow-surface (<5 meters) surveys.

To obtain very shallow information, the transmitted signal must go to zero very rapidly without ringing (oscillations of either the electronics or the wire loops themselves). Depending on loop characteristics, Zonge NanoTEM® transmitters turn off in approximately 1.5 microseconds. more

This rapid turn-off, and the high-speed, analog-to-digital conversion, allows data collection at depths less than 2 meters and in areas with electrical resistivities in excess of 20,000 ohm-meters. The receiver records the decay curve as 31 windows (timegates), from approximately 1.5 microseconds after the transmitter turn-off to about 3 milliseconds. 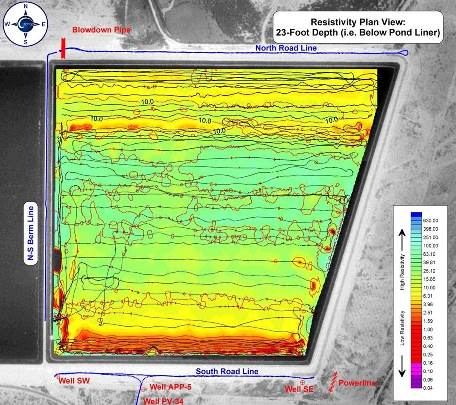 By changing transmitter-loop and receiver-loop sizes, NanoTEM® can be used for many different targets. Surveys can be performed using forty-meter (40 m by 40 m) transmitter loops with five-meter (5 m by 5 m) receiver loops to collect resistivity soundings in highly-resistive ground, and the same system used with a ten-meter (10 m by 10 m) transmitter loop with one-meter (1 m by 1 m) receiver loops to locate small metallic objects.

Because the method does not require direct contact with the ground and the data can be acquired with portable equipment operated by a single person, NanoTEM® is a relatively fast and inexpensive survey method.

NanoTEM is often used to measure terrain conductivity over the length of levees or dikes, to identify lateral discontinuities such as landfill boundaries, or to locate metallic objects such as UXO. Typical deliverables include plan maps of the project location and interfering cultural structures, color-contour maps of responses, interpretation maps with the cultural responses and subsurface responses clearly separated.