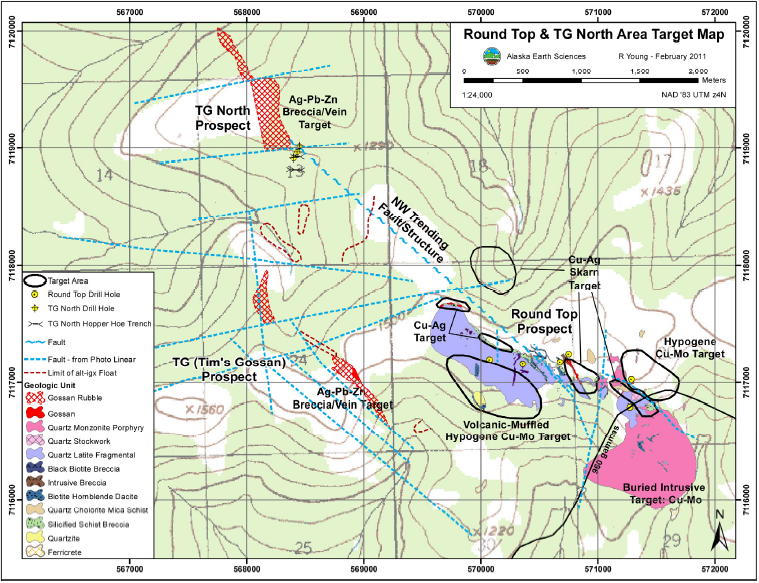 With modern 3D imaging of the geophysics, geology and geochemistry, Zonge identified new zones of interest in the Illinois Creek Mining District in the Kaiyuh Mountains of western Alaska.

In the early 1980’s, 114 line kilometers of ground magnetics, gravity, horizontal-loop EM, and induced polarization data had been collected in the Round Top Cu-Mo-Ag porphyry system.  Zonge reassessed this data in 2010, digitizing and scrubbing some data sets, comparing new resistivity and IP sections to earlier conclusions, and creating new models to better understand the complex mineralization of the system.

With the resulting new information, the Round Top porphyry system is a drill-ready prospect with five newly-identified, follow-up and step-off targets. 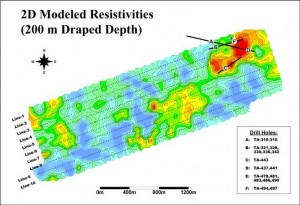 Using two Zonge GDP systems with a single remote transmitter and burros to haul equipment and supplies, Zonge collected 65 line kilometers of CSAMT data south of Taxco, Mexico.  Terrain in the Taxco Mining District is extremely steep with heavily vegetated mountains and deep canyons, which made the line preparation crucial to the success of the survey.

The largest of four geophysical surveys completed in the district was the Sur de Guerrero CSAMT survey grid. Elevations in the grid area range from 1400 to 1700 meters. Despite challenging terrain and the presence of power lines, the Sur de Guerrero CSAMT data clearly defined the horizontal conductive zone occupied by what is now a confirmed discovery, the Manto Esperanza Vieja Vein near depths of 200 meters.
more on CSAMT

CSAMT refers to controlled source audio-frequency magnetotelluric, a frequency EM survey method using a remote signal source. An EM signal is generated by a grounded dipole while electric-field and magnetic-field measurements are made at a grid of receiving stations. Subsurface resistivity values are later calculated from these measurements.

Resistivity values relate to geology, and both resistive and conductive rocks are identified with this method. Rock porosity, pore fluids and the presence of metallic sulfides determine the values. An anomalous conductive feature seen on the modeled CSAMT data from the Taxco survey is associated with metallic luster, pyrite-like mineralization. In contrast, the resistive rock is likely un-mineralized limestone or schist. While flat-lying conductors can be located using TEM or IP/resistivity, neither of these methods would have produced the modeled detail provided by CSAMT in rough mountainous terrain.

Conducted for the mineral-rights owner of a property with known uranium deposits where the Rose Breccia Pipe intersects the Hermit Shale Formation in northern Arizona, this inventive survey revealed surprising and important results for potential development.

For the first time, a high-resolution 3D seismic reflection survey was used to evaluate a breccia pipe structure and volume of material at the Hermit Shale level, approximately 1,100 feet below surface. Historically, the only accepted way to investigate these collapse structures is with drilling due to their near-vertical nature. But a non-destructive method was needed for this project due to the environmentally sensitive area.

There were two startling results: 1) at the depth of interest, the Rose Pipe is narrower than anticipated; and, 2) the Rose Pipe is actually two pipes with only one manifested at the surface. Survey results were used to narrow locations for drilling and sampling and to generate additional exploration funds due to the increased reserves projected by the discovery of the second pipe.