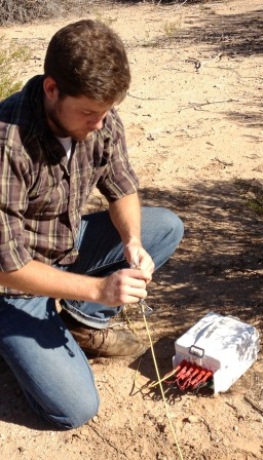 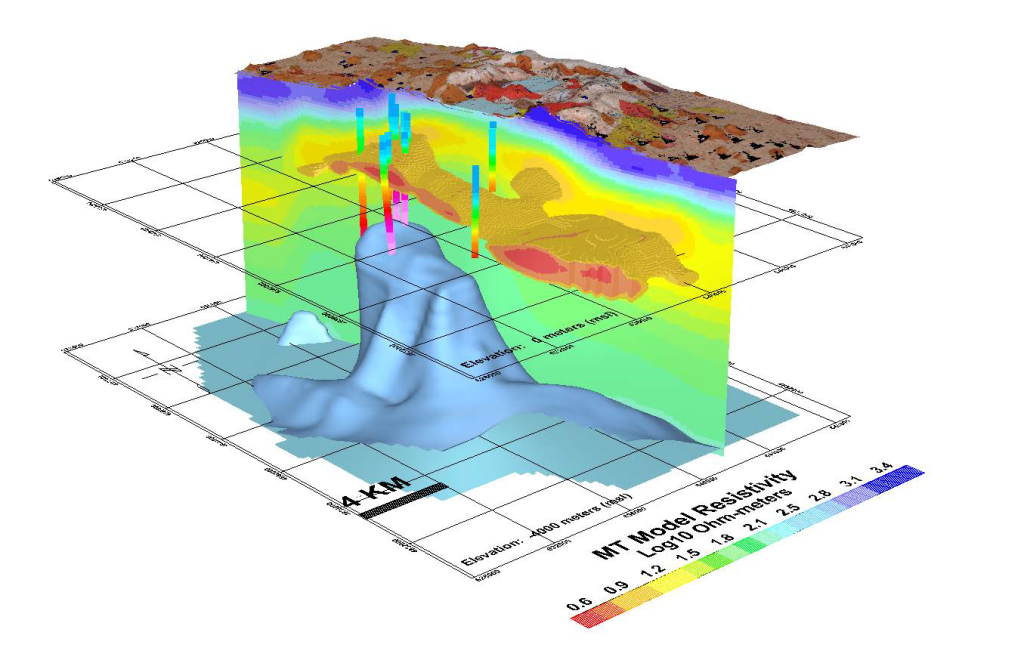 Smooth-model inversion is a robust method for converting far-field CSAMT or natural-source AMT data to resistivity model cross-sections. SCS2D inverts observed apparent resistivity and impedance phase data from a line of soundings to determine resistivities in a model cross-section. TM-mode data, TE-mode, or both may be inverted. more

To start the inversion, the model cross-section is usually given a background resistivity generated from a moving average of apparent resistivity data or a 1d smooth-model inversion section. Specific geologic structure may be added to the background model if there is drill-log or geologic-mapping information available.

To calculate apparent resistivity and impedance phase for a given model section, SCS2D uses a two-dimensional, finite-element algorithm to calculate far-field CSAMT or natural-source MT data. To model areas with rough terrain, the finite-element mesh is draped over an along-line topographic profile. TM and/or TE-mode data can be calculated for scalar, vector or tensor survey configurations for frequencies ranging from less than 0.001 Hz to 10 kHz.

Inverting apparent resistivity and impedance phase to smoothly varying model sections is an effective way to display the information inherent in CSAMT and AMT measurements. As smooth-model inversion does not require any preliminary information about geologic structure, observed data are automatically transformed to a resistivity model cross-section providing an image of the subsurface. Model sections generated with smoothness constraints are complementary to more specialized inversions incorporating specific geologic models.

EM2D is a finite element program which computes apparent resistivity and impedance phase responses of two-dimensional models illuminated by a plane-wave source field.

EM2D is particularly convenient for models which include topography. EM2D can read topographic profile information from a tabular file format and automatically adjusts its finite element mesh to follow the profile. more

Topographic-correction factors can be calculated using models with a uniform subsurface resistivity or topography and geology can be modeled together to capture the interaction between terrain and structure.

Models may include both subsurface structure and surface topography on cross sections up to one hundred dipole lengths long and twenty five dipole lengths deep. Model sections may have one to nine distinct geologic units, with each unit assigned a resistivity and an optional Cole-Cole IP dispersion.

Modeling results may be calculated for TM mode, TE mode or both source polarizations. Calculated model-response data are stored in a tabular ASCII file format, which facilitates plotting by generic contouring programs.

Smooth-model inversion is a robust method for converting CSAMT and MT measurements to one-dimensional soundings. Observed apparent resistivity and impedance phase data for each station are used to determine the parameters of a minimum structure model which includes the effects of the finite transmitter distance. more

SCSINV’s forward-modeling algorithm can include the effects of finite transmitter-receiver separation and a three-dimensional source field. Source types include a vertically incident plane wave for natural source modeling and grounded electric bipole or horizontal loop sources for CSAMT modeling. Accurate impedance magnitude and phase values are calculated for all frequencies and transmitter-receiver separations. Impedances can be calculated for scalar, vector or tensor survey configurations.

Lateral variation is determined by inverting successive stations along a survey line to produce a grid of smooth-model resistivity. Resistivity values are placed at the midpoint of each layer, forming a column below every station. The columns form an array representing a cross-section of model resistivity. Results for a complete line can be presented in pseudosection form by contouring model resistivities.

Inverting apparent resistivity and impedance phase to smoothly varying model resistivities is an effective way to display the information inherent in CSAMT measurements. Smooth-model inversion does not require any a priori estimates of model parameters. The data are automatically transformed to resistivity as a function of depth. Models with smoothness constraints are complementary to more detailed models incorporating specific geologic information.

CSINV inverts CSAMT or AMT frequency-sounding data into a layered-earth model. For controlled-source soundings, its calculations include the effects of finite transmitter-receiver separation and three-dimensional source fields.

CSINV has two inversion methods, an iterative inversion algorithm that minimizes the root-mean-square difference between observed and calculated data and a controlled random search inversion that minimizes the average absolute deviation between observed and calculated data. Both the iterative inversion and the controlled random search test random variations to the starting model and end up with a group of inverted models.

Model parameter errors are estimated from variation between inverted models that fit the data nearly as well as the best result. Neither algorithm changes the number of layers during inversion. Starting models can be automatically generated by CSINV or can be entered or edited manually. If geologic control limits the thickness or resistivity of a particular unit, it is possible to freeze selected model parameters so that they do not change during inversion.